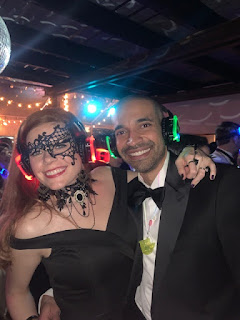 Your mom and I appreciate having the opportunity in discussing race relations in America.  One thing you said that triggered this reaction that I must clarify.  It was in reference to my statement that I got jobs because I was Black.

Saying this I don't mean to imply that my positions at universities were any way inferior to my white colleagues or other races.  I work hard studying at the schools I attended.  I earned my degrees like everyone else.  I realized that I was competing with other brilliant students.  Some were more talented than I was.  Nevertheless I had good self esteem.  I considered being Black a gift, and was blessed to be born in Georgetown, Guyana.

In America I was thought of as a foreign Black.  This designation was never derogatory to me, for I was always proud of my heritage.  You see I came to America at the right time in its history.  Barriers were being broken down in the 1960’s with the Civil Rights Movement and demonstrations with the Vietnam War.  It was at a crucial time.  America was the place to be, for your mother and I benefited because of these developments.  We were protected by living in campus communities where the students were more liberal.

But your mother and I always thought about what our future would be like as an interracial couple.  We found our dream in being educators and having good friends who were always willing to support us.  So living in the United States was a great blessing.  We never did anything stupid as a Black and White couple.  This was so wherever we lived, whether it was in Eugene, OR, New York City, Oswego, NY, Milwaukee, WI, Columbia, MO, or Virginia Beach, VA.

Despite the civil rights unrest that occured during 50 years of our marriage we were able to persevere and live safely.  Our only difficulty was when I suffered from episodes of manic depression that nearly cost us our marriage.  But all in all we have always tried to give to the poor and downtrodden.  Your mom does a great deal of charitable work at the Church of Holy Apostles and the community that I admire.  Every month I send hundreds of dollarsto help out family members in Guyana.  As I have said repeatedly that in the time of crises we could only do so much.  Everyone has to play their part in making this world a better place.  Thanks for all you and Shannon are doing for charity.  Let us keep working for social change so that all lives in this nation will improve.  May God bless our efforts!