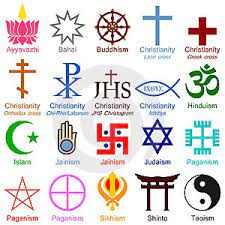 Religions present believers with diverse paths.  These paths are concisely captured in the following faith traditions listed based on the number of adherents, and importance as a faith based on their influence:

1. Christianity (2.2 billion) – Jesus Christ is the Son of God.  God the Father and Holy Spirit complete the Trinity.  This religion major problem is “sin.”  Christ came to earth, died, and resurrected to save mankind.

2. Islam (1.6 billion) – monotheistic with Allah as God, considers itself the true religion with Muhammad as its Prophet.  Muslim beliefs are in the five pillars – repeating the creed, reciting prayers in Arabic, giving to the poor, fasting with certain abstentions from sunrise to sunset, and making a pilgrimage in one’s lifetime to Mecca.

3. Non-Believers (1.1 billion) – atheists, agnostics, and people with no-faith tradition had its roots in 5th century B.C.E. Greek civilization and the Age of Enlightenment in the 18th century.

4. Hinduism (1 billion) – Brahman is the Ultimate Oneness.  There is an infinite representation of gods and goddesses.  Deities become incarnate in idols, temples, gurus, rivers, animals, etc.  Hindus’ quest is to become free from the law of karma – continuous rebirths.

5. Buddhism (500 million) – doesn’t believe in God or gods.  The big problem is escaping suffering, how to become Enlightened, and attaining freedom from the cycle of rebirth.

6. Chinese (394 million) – Confucianism (5-6 million) and Taoism (20 million) are major Chinese religions.  Their other faith traditions are Buddhism and Shamanism.  Confucian rituals formalized how Chinese should act in society.  Daoism does the opposite and sees “the way” as being natural by going with the flow – practicing non-resistance.

7. African – Yoruba religion (100 million) of West Africa and its diaspora consist of a vast pantheon of superhuman beings known as orishas [adapted as Candomble (167, 363) in Brazil, and Santeria in Cuba (22,000 United States)] promoting believers’ harmony with nature with divination rites, and some practices influenced by  Christian traditions.

8. Sikhism (23 million) – Overcome the self.  Align with the will of God, and become a “saint soldier,” fighting for good.  Sikhs believe in reincarnation until resolve karma and merge with God.

9. Judaism (14 million) – Abrahamic religion like Christianity and Islam that shared its influence of monotheism.  Jewish teachings are based on the Books of the Old Testament and the Talmud.

11. Jainism (4 million) – polytheistic faith of Indian tradition, affirms the existence of all life forms, with beliefs in non-violence.

12. Zoroastrianism (200,000) – Persian monotheistic and dualistic with “good” versus “bad,” is believed to have shared this concept with Judaism.

“Universal Spirit, shine your light on all faith traditions and help believers find their rightful path.”