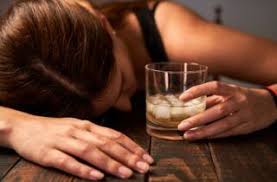 It’s often said that those who don’t drink shouldn’t start.  For those who do, they should drink in moderation.  Some may tell you how easy it is to become hooked on booze.  Alcoholism is addictive and may cause your life to end tragically.  TV viewers have been shown the tragic loss of some celebrities, politicians, rock stars, actors, and actresses to addiction.  Even if someone should survive alcoholism it can still lead to impairment, violence, suicide, and criminal activities.  Stonewall Jackson (1824–1863), a Confederate General during the American Civil War said, “I am more afraid of alcohol than of all the bullets of the enemy.”  He was convinced that alcohol was bad for Americans.

Alcohol in the media covered many topics:

•  The number of liquor billboards in poor neighborhoods

•  The positive and negative effects on life expectancy

•  Debates on the legal drinking age

•  Self-regulation by the alcohol industry

Bill Gates (b. 1955), a business magnate and philanthropist said, “I'm a great believer that any tool that enhances communication has profound effects in terms of how people can learn from each other, and how they can achieve the kind of freedoms that they’re interested in.”  Mass media has such power to influence its audience.   Christians believe their bodies are holy temples that are protected by God.  It’s always their goal of keeping their bodies pure, clean, and undefiled from alcohol and drugs.  Samuel Johnson (1709–1784), an English writer and lexicographer said, “Promise, large promise, is the soul of an advertisement.”  Most people should have discerning minds to know what ads are beneficial.  It therefore best to select what’s uplifting in advertising, and to help others to do the same.

Alcohol has caused numerous problems in people’s lives.  Some however were able to seek treatment for their addiction.  Medical professionals have described the impact of alcohol abuse on the American economy.  A brand of alcohol was even named after the renowned Indian chief Oglala Sioux, but several states have banned this liquor.

Before it was prohibited, liquor advertisement had become a hot topic on TV.  Driving while drunk had become a major problem. In 1998, The New York Times reported the Senate’s resistance to allow the liquor industry, and restaurants to establish a uniform national standard for driving. There was a time too, when colleges played down the use of alcohol in the lives of students.  This resulted in a number of alcohol-related deaths on campuses.  To help this situation, first year college students were encouraged to live in alcohol-free housing, participate in booze-free events, and there was a ban on liquor at rush events for fraternities and sororities.  Afterwards, several liquor marketers were willing to put statements on bottles attesting to the potential benefits of drinking in moderation that met with the approval of the United States Bureau of Alcohol, Tobacco, and Firearms.

Tom Scholz (b. 1947), a rock musician and engineer said, “Higher Power was the result of a personal experience: a friend of mine who went through the process of addiction and recovery.  It’s a very tough thing - very easy to become addicted and very, very hard to become a recovering addict.”  Scholz’s remarks shone a light on how serious addiction could be, and the difficulty to beat this habit.