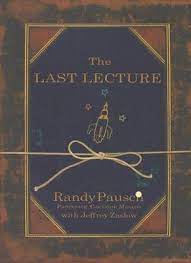 Randy Pausch’s The Last Lecture is a rather moving work. This book that was a national best seller is a model for people preparing and facing major health issues. Pausch who was a professor of Computer Science at Carnegie Mellon University received a diagnosis of pancreatic cancer that upended his life. He had three to six more months to live.

This realization led him to give the last lecture at Carnegie Mellon where he was a popular professor in “virtual reality.” Pausch therefore painted a picture of his life. He loved his family, parents, teaching students, sports, and Teddy Bears – the bigger the better. He praised his wife Jai as a caregiver, and expressed regrets that his young children wouldn’t know him when they become older.

Pausch was open to the possibility that his wife might decide to marry again. If she didn’t, he felt that would be okay with him. To prepare for this impending reality his family moved from Pittsburg to Virginia to be close to Jai’s family. He talked about how he and his wife sought counseling that would help them traverse this rather trying time. He mentioned his disagreements with Jai concerning how they should spend the last days of his life,

It was decided that he would spend more time with the family. So, Pausch endeavored to bond more with his three young children. He went on walks, played with them on a swing, read stories at bedtime, made movies, and wrote notes about the family. These activities were rather demanding, nevertheless Pausch wished that after he dies his family and children would have good memories of him.

To his audience he expressed a number of virtues that they should pursue. He wanted them to tell the truth. This he saw as being essential in life. He talked about overcoming brick walls that everyone has in their life. Pausch explained that these walls come in our lives for a reason. But when they do, people should never give up. They should keep trying, and they would succeed with hard work.

Pausch said that his talk wasn’t about dying. It was about living. Throughout the lecture he showed how people could live a full life. He knew that there were some situations that were most challenging. So, he acknowledged his diagnosis of terminal illness, but explained that the months that he has to live he would do so with optimism. Pausch wished to be remembered as someone who stood for life-generating attributes.