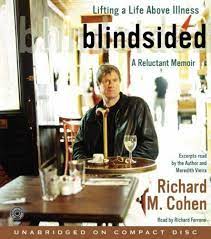 Richard M. Cohen’s Lifting a Life Above Illness: Blindsided - A Reluctant Memoir spoke to readers who are facing chronic health problems. The writer explained his difficulties with living with multiple sclerosis and cancer among other trials. His health problems led to numerous side effects to which he had to make adjustments.

Coping with these diseases were essential in Cohen’s life. His inability to walk normally, problems with his speech, and multiple cancer operations of his colon were daunting. Despite these problems Cohen had to work, raise a family, and cope with these afflictions. But these difficulties affected his job as a senior producer at CBS, PBS, CNN, and later at Fox.

Cohen’s work often required that he travels. Initially, his health wasn’t as bad. So, he made a number of international trips including Israel, Palestine, Beirut, Poland, and El Salvador. These demands were rather stressful. Cohen also covered some major national political events of presidential candidates as he worked on Walter Cronkite and Dan Rather news programs at CBS.

But Cohen was rather fortunate. He was able to marry his sweetheart Meredith Vieira who was a Today Show host, and they had three beautiful children. After he had problems with his eyesight – since becoming legally blind, it was his wife who had to shoulder most of the responsibilities in their home. Vieira wasn’t only working at 60 Minutes, but she was the caregiver in their new home, and did most of the driving. By this time, Cohen was using a walking stick, and taking the subway to get around.

Under these pressures the author explained how he often lost it. The emotional toll was great on him and his family. His children were young and often treated him condescendingly because of his health problems. Vieira was under pressure at her job at CBS. Eventually, she would resign but was able to find work on the View. Yet, despite all the problems at their work and home, Cohen wrote that he was able to remain optimistic about life. He stressed he was living fully with the hand he had to play.