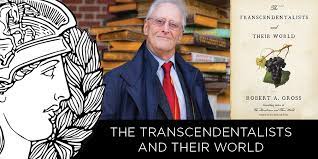 Robert A. Gross’s The Transcendentalists and Their World is a comprehensive study of life in the early 1800s in Concord, Massachusetts. This book amplified on the conflict between a community mindset versus a focus on an individualistic orientation. This tension was captured in the first part of the book that described Concord before the 1830s. The second half dealt mainly with the lives of Ralph Waldo Emerson, Henry David Thoreau, and the anti-abolition movement.

Early life in Concord was dominated by its First Church, farming, politics, school, and the militia. Its pastor was Ezra Ripley and all residents were expected to attend church. Concord paid the bills for Ripley’s service. Many residents in this community were farmers, and the Whigs controlled politics. Only White males were allowed to vote. The society had a grammar school for young children, and young men served in the militia. Ripley’s church was liberal because it was open to changes in order to keep its flock. He preached sermons based on the gospels, and stressed the congregation’s interdependency to fellow citizens. The church was therefore community oriented.

Just prior to 1835, Ripley’s concept of community and the church began to crumble. There was a change taking place in the social order. The Thoreau sisters who were members of the First Church decided to form their own group. They were provided with support from Calvinists in Boston, and this led to the Trinitarians. Other changes brought about the genesis of other faiths including the Unitarians and Universalists. It was during this time that there were developments in the economy, railway, establishments of more schools, growth of political parties, the rise of the Social Circle, lyceum, and the beginnings of an Anti-Masonry movement.

Thoreau grew up in Concord, and received an education in its grammar schools, he later attended Harvard. His father was a pencil maker. Unlike Thoreau, Emerson settled in Concord in 1835, after having graduated from Harvard, and traveled in Europe. He received his Transcendental ideas from German idealists, Thomas Carlyle, and William Wordsworth. Concord with a population of 2,000 was ideal because of the size of the community. It wasn’t like Boston, New York, or Philadelphia where there existed masses of people and a mass culture. In Concord, Emerson could interact with individuals.

Emerson’s and Thoreau’s writings emphasized the importance of the individual in a culture. Their arguments were infused with democratic beliefs. Emerson viewed religion as not a building, a doctrine, or government. In the Philosophy of Modern History, he viewed education as the guardianship of every individual, and saw his philosophy as an answer to the needs of people. He was however slow in joining the bandwagon of the anti-slavery movement, but later came out with a strong speech on the abolition of slavery on the West Indian Emancipation Act of 1833.

Thoreau lived for some time in Emerson’s manse with his family. He had taught school, but is known for living in a hut surrounded by nature for a little over two years at Walden. While living there Thoreau read, wrote, went for walks, and grew his own food. In 1846, he was jailed for refusing to pay taxes. Thoreau is known for his writing about Walden, and his piece on civil disobedience.