Thanksgiving for All God's Creation 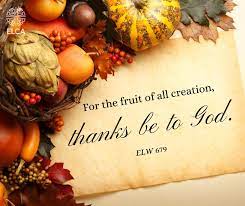 Thanksgiving for All God's Creation

A pediatric surgeon Bernie Siegel (b. 1932) said, “God wants us to know that life is a series of beginnings, not endings.  Just as graduations are not terminations, but commencements.  Creation is an ongoing process, and when we create a perfect world where love and compassion are shared by all, suffering will cease.”  Inevitably, Siegel was putting his trust in mankind to create a perfect world.  But our world is broken because of our sinful ways.  Christians believe it will only be transformed through a belief in Jesus Christ.

How should people live in this world?  They have to use their imagination, and ask God to guide them in their daily lives. George Bernard Shaw (1856–1950), an Irish playwright and critic wrote, “Imagination is the beginning of creation.  You imagine what you desire, you will what you imagine and at last you create what you will.”  Believers will know God by meditating on his Word.  They will be touched by his divinity, and forgiveness.

An actor and producer James Cromwell (b. 1940) said, “Often we are recreating what we think we’re supposed to be as human beings.  What we’ve been told we’re supposed to be, instead of who we authentically are.  The key about creation of full self-expression is to be authentically who you are, to project that.”  Such a gift comes by faith.  With this gift all will walk in godly ways by doing what’s right.

In God’s creative process wise people have pondered the role of nature.  Luigi Pirandello (1867–1936), an Italian dramatist and novelist wrote, “Nature uses human imagination to lift her work of creation to even higher levels.”  The beautiful displays of trees, mountains, and streams around us are a reflection on God’s grandiose nature.  People’s hearts will leap upward to encounter God’s gracious blessings.

Nevertheless, life is such a powerful statement of God’s gifts to us.  An attorney and Freemason Albert Pike (1809–1891) said, “One man is equivalent to all Creation.  One man is a World in miniature.”  In its full reality it’s wise to view this phenomenon.  Scripture reveals humankind was made in God’s image and is spiritually like him.

How can people make a difference in the world?  There’s some uncertainty about our life’s mission.  A French poet and novelist Victor Hugo (1802–1885) wrote, “One is not idle because one is absorbed.  There is both visible and invisible labor.  To contemplate is to toil, to think is to do.  The crossed arms work, the clasped hands act.  The eyes upturned to Heaven are an act of creation.”  It’s always good to remember that everyone is uniquely different.  How can it be determined what’s best?  How do people contemplate their love of nature?  It’s worth noting that practicing contemplative meditation is essential for justice, wholeness, and peace.

How should people regard creation?  Who is ultimately responsible in this world?  Joseph Franklin Rutherford (1869–1942), second president of the incorporated Watch Tower Bible and Tract Society of Pennsylvania said, “Jehovah created the earth and therefore it is his by right of creation.”  Every aspect of life that exists is God’s gift to us.  He controls everything, and is the greatest source behind all living, and non-living things.  People ought to be thankful for his wonderful creation.