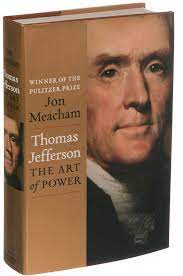 Jon Meacham’s Thomas Jefferson: The Art of Power is a book that casts light on a rather complex man. Past historians didn’t view Jefferson favorably. Some thought among other things, he was paranoid about his ideas of the British monarchy. Meacham corrected this view, admitted that Jefferson had faults, but felt he still had to be ranked as one of America’s great presidents.

In his early life Jefferson attended the College of William and Mary in Williamsburg. There he was educated and was known for his love of the English classics. He learned Greek, Latin, and French, and became versed in ancient philosophy. But on graduation he sought a political life, and was elected to the House of Burgess. Jefferson became prominent in Philadelphia, and active with the American colonies break from Great Britain. He was instrumental in writing the Declaration of Independence. Jefferson was later governor of Virginia at the time of the American revolution.

In the next election when Jefferson became president Aaron Burr, his vice president was always a problem. (He killed Hamilton in a duel). Jefferson pursued a Republican agenda. The Federalists under Adams had packed the courts with justices so, Jefferson did what he could to alleviate this situation. While in office he was living in Washington DC, and away from his home at Monticello. Jefferson was known to have an ongoing relationship with his slave Sally Hemings since his days in France as an ambassador.

The next election when Jefferson was again the victor he was faced with other problems. There was an attack on the USS Chesapeake that roiled the nation. There was a fierce debate whether America should go to war with the British. There was also good news for Jefferson with the Louisiana purchase from France that increased the size of the nation. Still, like it was before, there was talk about secession of the Northern states. The Louis and Clarke expedition to the Western seaboard was promising for American interests. But an American embargo caused problems, and Americans had difficulties making the necessary adjustments.

In retirement Jefferson moved to Monticello. He was able to supervise his slaves, read, wrote letters, build, and took horseback rides. His pet project was the establishment of the University of Virginia in Charlottesville. Jefferson died on July 4, 1826 on the 50th anniversary of the America’s independence. It was also on this same date that John Adams also died with whom he had been able to renew their friendship.